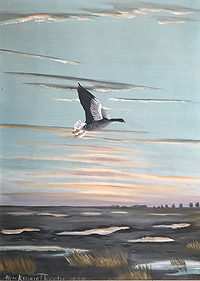 Mackenzie Thorpe
Goose over the Marsh

Mackenzie Thorpe
Geese on the Marsh
•

Mackenzie Thorpe was born in Sutton Bridge in 1908 died 1976. His father, Mackenzey Thorpe, was a Romany and his mother was from Sutton Bridge. He was one of eight children. He left school at twelve and worked on farms. He began poaching at a young age and collected a string of minor convictions. At seventeen, he joined the crew of The Alert, an inshore cargo boat and spent nearly a year at sea. Back in Sutton Bridge, he took up boxing and became heavyweight champion of Lincolnshire. He married his wife, Cicely, by court license and they had six children.

He met Peter Scott in 1928, whilst supposedly shooting wild geese on Terrington Marsh - he was actually poaching. He met James Robertson Justice shortly after, when working as a professional guide for shooting parties. Scott set up a small wildfowl centre on the marsh and Kenzie became his assistant. The reserve was dismantled at the beginning of World War Two when Scott joined the navy. Kenzie returned to poaching. He was promptly caught and fined £7. He also had his gun confiscated.

During the War he worked at a pumping station at Tydd for 1s. 1d an hour. He was sacked for organising a strike. He joined a gang building pill-boxes along the sea wall and taught his group to shoot using catapults. As wartime rationing began to bite, Kenzie began to shoot to sell for the black market. Brent geese fetched 10s each, pheasants £2 a brace. Kenzie also shot and sold other birds that weren't usually associated with food - sea gulls and wigeon.

In 1941 he joined the navy but was discharged as medically unfit after two months. He returned to Sutton Bridge and to poaching, once being caught by the Home Guard. Between 1931 and 1956 he faced 29 charges connected with poaching. He was fined a total of £120. 17s. 9d. He had four guns confiscated. In December 1945 he was sentence to three months in gaol for assaulting a game keeper. This was unusual for Kenzie, who genuinely respected the fact that game keepers had a job to do, but there was a long standing family feud behind this. Lincoln gaol was an initial shock, but Kenzie reverted to type. A non-smoker, he had a surfeit if the one currency valued in prison above all else - cigarettes. He could trade with other prisoners at no cost to himself.

When he visited Kenzie, Prince Charles mentioned the game keeper at Sandringham. Poaching on the estate was an ambition of Kenzie's. When he tried it he was caught by the King's Head Keeper, Mr. Amos. He was also a special constable. Therefore Kenzie was charged with resisting a constable as well as the other charges relating to poaching. His total fine on this occasion was £11. Kenzie gave up poaching during the 1950s to became a professional wildfowler and a guide.