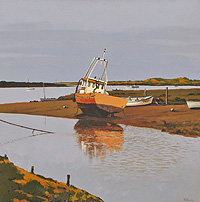 Paul Gunn - Across the Sand Dunes at Burnham Overy
• 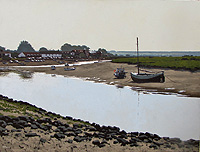 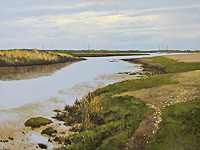 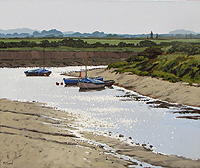 Paul has a love for the English countryside, and as a small boy used to copy scenes from postcards and souvenir booklets in watercolour from places he visited on holiday. The first place which really stirred his enthusiasm was Brixham in Devon and Dartmoor. Paul loved the boats in the harbour at Brixham, and was similarly captivated by the vast open countryside of the moors. He can remember painting pictures of Dartmoor in the pouring rain, car headlights and big brooding skies. The ideas were better than the execution of the pictures and although his parents said they liked them, they probably didn't, they were a bit gloomy, but Paul loved them!

During school days, his passion for painting continued and he was fortunate enough to be top of the art class all his school life, his final art teacher at secondary school suggested that he continue his tuition at Art College which, with his parents' blessing, he did. Although college life was a great experience, his particular choice of subject, landscape painting, was frowned upon by most of the tutors, although he did achieve his diploma, it did kill his creativity for many years and he stopped painting altogether.

In 1979 after being severely injured as a passenger in a car crash, life changed drastically for Paul. After a year's recovery time, he started work at an engineering company as a Technical Illustrator. It was during this time he re-kindled his interest in Art. Paul took on commissions, produced extremely detailed illustrations of people's houses and pet portraits, although the work was well received, he came to a grinding halt again when his family came along.

In 1997 he decided to become a full-time Artist. Paul's first works were a return to doing commissions, houses, pets, etc. occasionally doing work for building companies producing artists' impressions of new builds etc. He later joined a local Art Society for a few years joined an art group known as Thames Valley Artists. It was during this time Paul gained a lot of experience and inspiration from his fellow Artists, and his painting finally took it's present course, and his childhood love of the west country was diverted north to the north coast of Norfolk. The first time Paul visited the place was a revelation, he had an instant affinity with the place, the wide rolling salt-marshes, the muddy wet creeks, the massive skies and the boats.

Light plays a vital part in his paintings and he loves the way the light constantly changes. One minute a scene can seem bland and uninteresting, the next the sun comes out transforming it all into a sea of colour and rich textures which for Paul just cries out to be painted. Some of Paul's greatest inspirations are the back-lit scenes where the sun shines off the sand or mud with almost blinding strength, silhouetting the boats which are lying idly waiting for the return of the tide, or the scene of a creek in the early morning light with the sun's first rays beginning to caress the peeling paintwork on the sides of boats.